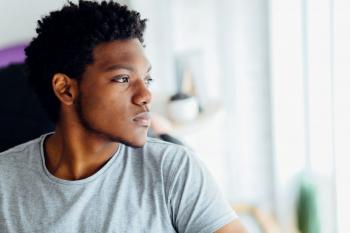 "The hardest thing for me was coming into foster care. I was so scared that they were going to break us up.”

Children's Harbor was created by Bill Mahoney and its founders because they saw that brothers and sisters were being separated while in foster care and they wanted to create a place where siblings could remain together and feel safe.

When Marcus and his brother and sister came to Children's Harbor last December, they told us that they had never been given wrapped presents on Christmas morning before.  In fact, they never had presents at all.

Marcus shared how their neighborhood was a place where gunshots rang daily like doorbells:

"I think I was six the first time I saw someone get shot,"   he says candidly.  This was a place where drugs invade the homes of too many families, leaving children to fend for themselves. Except it wasn't just him. He had two smaller siblings to care for.

As the oldest brother, he was "in charge" of the household. He set the tone. He made the rules. He kept his siblings safe. And when mom and dad disappeared for days on end, it was his responsibility to make sure that there was food to eat. His eyes reflect the weight of a responsibility he should have never experienced as a 14-year-old boy.

"Honestly, it was easier for us when they weren't there. I always made sure that Nya and Sam went to school because I knew they would have breakfast and lunch. I couldn't always get dinner but you get used to not eating dinner every day."

Then one day, his little brother, Sam, fell on the playground at the park and broke his arm. The school called for an ambulance and it wasn't long before the hospital realized what was going on and the police came to their door.  "The hardest thing for me was coming into foster care. I didn't know what to do - I was so scared that they were going to break us up. Then, when we came here, it was even harder to watch someone else take care of my brother and sister. I should be happy, right? I didn't expect it to feel this way. I mean, I know that I don't have to worry about them anymore but the worry doesn't go away."

It is only through the support of our Harbor Keepers that we are able to continue doing everything that we can to shine light into the lives of children like Marcus, Nya, and Sam who have been impacted by trauma.